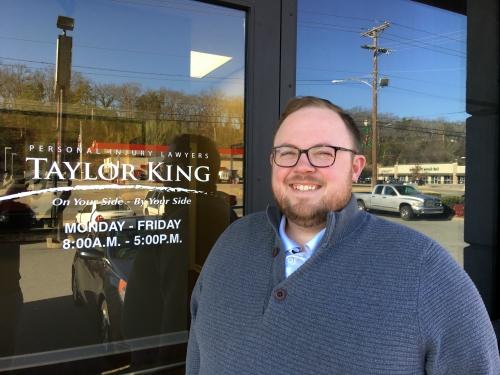 Bobby has been a part of our Taylor King team for almost two years. He has served as a case manager and is now a litigation assistant in our North Little Rock office.

Outside of work, Bobby enjoys spending time with his wife, Jill. They love singing together, exploring Arkansas, and going on an occasional road trip to see their favorite musical, Hamilton.

He considers himself happiest when he’s outside around a warm fire during the fall with family and friends. The one food that he could eat over and over? BBQ Ribs from Blues City Café in Memphis, TN. The only thing he has to say about it? “Go there. Now.”

If he were to win the lottery, he and Jill would pack their bags and travel the world! Considering how much Bobby loves music, he most likely wouldn’t leave the house without his favorite albums as well.

When asked if there is anything he would love to learn to do he said, “Play the guitar like John Mayer, sing like John Legend, and dance like Bruno Mars.”

Favorite Thing about Working at Taylor King Law: Knowing the company genuinely cares about its clients and employees.